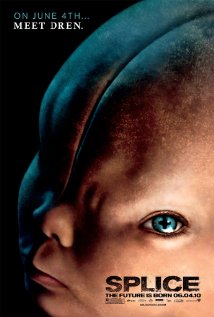 
This was a movie, I always wanted to see in the theatres, however, never made it to see it. So, last night, while flipping through countless satellite channels, I just happened to come across this, starting in ten minutes on the Space channel. I've been a fan of Adrien Brody's work, and when I remembered he was in this, I decided to grab some chips and settle down to watch it.


The lowdown of the movie, begins with two genetic engineers splicing animal DNA to create new animals, just like the above description says. The action started pretty quick in the beginning with Elsa, having a soft spot for this new hybrid animal. She becomes a surrogate mother for it, trying to teach it, and help it develop.


When the main action of the movie took off, it was quite good. They run away with Dren, who incidentally got her that name, while playing with scrabble tiles with Elsa, forming the word nerd, and Elsa looking at it backwards. The development of the "animal" is very quick and the once tiny little spliced animal, is now becoming a grown woman. Who has eyes for Clive.


Without too many spoilers, the viewer finds out that not only was animal DNA spliced into Dren, but human DNA as well, which explains her appearance and ability to love and want to be loved.


Close to the end of the movie, the action is much greater, some key characters do get killed and of course, what is a movie like this, without a twist at the end that could possibly hint of a sequel.


It wasn't filled with gore, however, I did find it had a good storyline, and the acting was quite well. I would recommend watching this, therefore I will give Splice a 4/5.


Bidding you bloody nightmares,
Nyx
Posted by Two Gory Chicks at 11:27 AM

Two Gory Chicks
We are two chicks who like gore. The more blood, the better. We will be reviewing horror movies, old and new, blockbusters and flops.

Hey everyone..be sure to check out our friend's Facebook page..